Today you can download our new single. It’s called EVIL PARTY, and it was one of the very first songs that we wrote together.

EVIL PARTY is about a lot of things and we’re not going to tell you how to take it. But we think it’s a fun track and we really hope you enjoy it. It’s free, and it’s part of ChipWIN Volume 4. This compilation puts together tracks by some of the finest chiptune-based artists working today. We’re incredibly grateful that the organizers and the judges of this compilation saw fit to include us.

EVIL PARTY was produced by Brendan Howlett, one of the finest men in the land and someone who means a great deal to us. I mixed it, using its kitchen sink production style as a learning experience. Have you ever had to balance a kick drum, FM bass, live bass, keys, vocals and heavy guitars all at the same time? It’s not too much of a peek behind the curtain to tell you that it’s a maddening but wonderful process, and I ended up feeling very proud of it. DJ Cutman of the ChipWIN community mastered it, and he did a damn fine job. 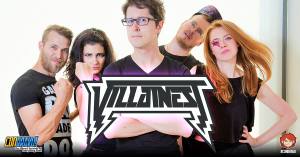 We’re all set to play our first ever convention this Friday, and we couldn’t be more excited. We’ve put together a seriously high energy set of live favourites, originals and covers. It is exhausting and exhilarating to play in rehearsal, so we can only guess how it’ll sound on the night! We honestly don’t know what to expect from our first Con, but that’s part of the thrill of being in a band that’s slightly left-of-centre. Hopefully the ConBravo! crowd will have a good time with our Sega-based cacophony! We can’t wait to get there and find out.

We’re on the bill with Epic Game Music, which is always a joy. James Ronald was actually one of the very first Canadians I ever spoke to in 2011 after moving to Toronto, though we wouldn’t meet properly for at least another 2 years. He’s an excellent performer and a great dude.

Then I’m excited to catch Overclocked University – I have spent hours upon hours on the Overclocked sites listening to remixes over the years, not least during my time as a student in England. To think that I’d move over here and play a show on a bill with a band affiliated with them is almost completely insane and I can’t wait to see them play.

Headlining is Tupperware Remix Party, who I have typed about at some length while covering in 16-bit form. They’re currently on a tour called the Kurt Russell Tour, so I have no doubts that they’re our kind of space aliens. TWRP are one of the best bands around and we’re excited to share the stage with them.

We were very humbled to learn that Saturn, of Blast Processors fame, saw fit to cover our first single, Welcome To Paranoid Island. Paranoid was the first song we ever wrote together and I think it lays a strong foundation for what we’re about as a band. That we recorded it, somebody heard it and decided to put their own spin on it is a fantastic feeling, and we thank Saturn immensely for it. It’s things like this that make the VG and chip- inspired music communities great. Saturn has turned this into a great, surprisingly legit sounding 80s synthwave song! If you enjoy the sound, you should definitely pick up his new EP, ALBIORIX. It’s a tremendous synth space adventure.

You can listen to Saturn’s cover of Paranoid here: